Arrays of OBDs can be stamped with relatively low pressure if stamped incrementally in successive rows starting from an edge. Material thickness does not have to be altered. Distortion caused by dome formation is incorporated in subsequently formed OBDs, which can also switch sides to compensate.

A single machine that can form OBDs with different characteristics, like an impact printer for domes instead of letters, could 'print' a wide range of shape. Because of the low pressure required, printing tools and rollers used for forming OBDs could be made with common 3D printing materials.

1) Overview- bistable domes and the effects of overlapping

1) Overview- bistable domes and the effects of overlapping: A flex-actuated bistable dome is a very low profile indentation in thin hard material formed so that when the material around a dome is bent toward the same side as the dome it will buckle and snap toward the outside of the curvature. This simple one-piece structure can be made in a wide range of scale.

Effects of overlapping: Bistable domes with overlapping perimeters are structurally connected and the band of material through their connected perimeters is higher (or lower) in profile toward the centers of the domes. The domes are formed so that this band is structurally longer than the neutral flex axis of the overall structure they form. When the overlapping dome structure is bent this difference creates flexural forces proportional to curvature (see links below for more detailed explanations). The overlapping domes share and neutralize flexural forces by switching sides in numbers proportional to curvature. Their switching patterns reflect location, orientation, and degree of curvature, as long as flexural forces are not absorbed.

Dome characteristics: Bistability can only be created if certain material, dimensional, and formational requirements are met. Bistable domes are generally not much higher that the material they are formed in, which has to be hard enough so it doesn't absorb the flexural forces that switch them. Sensitivity to flexure can be controlled by changing material characteristics, relative dimensions, and overlap percentage. Within a range a dome can be equally bistable (equally sensitive to flexure from either side) or have a biased sensitivity for one side.

Minimum radius: When a bistable dome structure made with equally bistable domes (both sides) is flattened approximately half of the domes will be oriented to one side and half to the other. When all domes are oriented to one side or the other it has reached its minimum radius limits. In between these two states the domes will switch in patterns that reflect the changing shape of the overall dome structure.

2) Springback control: Arrays of closely spaced overlapping flex-actuated bistable domes can provide control of flexural forces that cause springback when shaping thin high strength materials. For example, 1/10 mm thick 302 series spring tempered stainless steel sheet can be pre-shaped with closely spaced overlapping bistable domes to form a stiffer truss-like structure only several times the thickness of the original material that can be shaped and reshaped with little or no springback. Wherever it is bent domes adjust their orientations incrementally, snapping toward the outside of the curvature neutralize flexural forces and lock in the new shape.

3) Creating shape memory: It is also possible to use bistable dome structures to create localized flexural forces that produce a predisposition or memory for a desired shape. This can be done by managing dome bistability characteristics in patterns and zones. Within physical and minimum radius limits the dome structures force the sheet into a preferred shape.

Curvature could be created with an axis perpendicular to domes formation (and the rollers that may form them).

4) Controlling stiffness/flexibility and rebound in bistable dome materials: Overlapping bistable dome arrays can noticeably stiffen the material they are formed in. When bent, the dome experiencing the greatest concentration of forces (or the weakest dome in the area) will switch first. As the bending motion continues more domes will switch toward the outside of the curvature. Locking domes into one state or another stiffens the structure even more.

Orientation patterns, structures, and shapes may be locked in mechanically or with external coatings during or after formation for permanent stiffening. Coatings with more flexibility could also be used to control stiffness/flexibility and indentation rebound in the overall dome structure or particular zones by controlling the ability of individual domes to switch out of their preferred orientations.

5) Thin structures, laminates, sandwiches, composites: Dome structures are known for their strength. For certain applications interlocking bistable multi-dome structures may prove significantly stronger for their weight than if the original sheet material had been used. Flexibility/stiffness may be controlled with adhesives and fillers that control the ability of domes to switch.

OBD arrays of different shape, size, and bistability could be overlapped in layers to produce more complicated curvature,

6) Small scale production and prototyping: Preforming with bistable domes can make previously unmanageable materials easier to work with. Generic bistable dome materials may help reduce tooling requirements as well as the need for structural framing and forms, especially when used as part of a laminate or sandwich.

7) Repair, patching: OBD arrays could follow/parallel existing contours with less mechanical support or attatchment while glues set, for example, and would be stronger than the flat equivalent.

8) Computer modeling: Behavior of overlapping dome structures seems very predictable. It can also be observed that the orientation of a few domes in the middle of hundreds can effect the shape of the whole array. Bistable dome behavior may present an opportunity to model complex curvature of an unstretched plane surface in simple interconnected bistable/digital dome increments.

Note: Making contact switches from bistable domes is likely easier for a single row than for a 2D array. Using overlapping bistable dome rows for sensing shape has been described previously. See link below.

9) Limitations: The bumpiness of dome arrays may only require a thicker than usual coat of finish or it may be a problem. A dome array structure may be over bent to a degree without damage but its functional usefulness is limited to the range between its minimum radius limits. Minimum radius limits are a function of dome characteristics that can be manipulated within a narrow range.

Two identically sized bands of .03" 302 stainless steel (14" x 1.5",  as seen in video), one flat and one with OBDs, are compared for resistance to deformation.

The OBD structure with all domes on one side is approximately double the thickness, in profile, than the flat .03".

The flat piece is collapses gradually and is collapsed by 1.5lb weight. The OBD structure can hold 4x the weight, 6lb, and collapses suddenly with 6.5lb.

For more on the uses of flex-actuated bistable domes:

US Patent # 5563458. Apparatus and Method For Sensing Surface Flexure.  (expired)

Bistable dome pump- a flexible pump that pumps when bent. 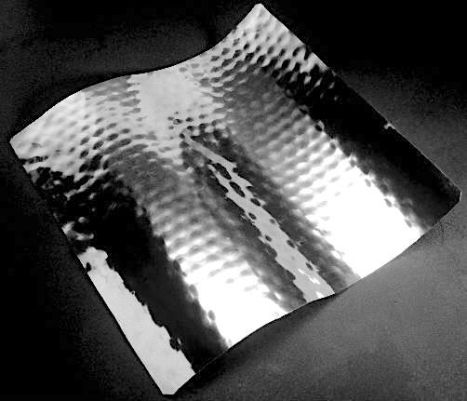 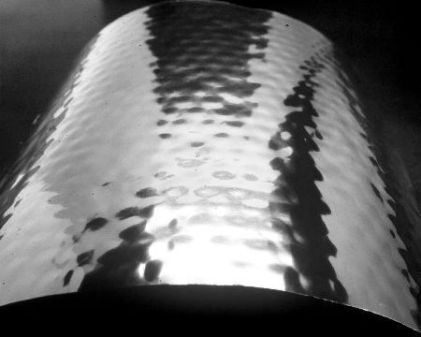 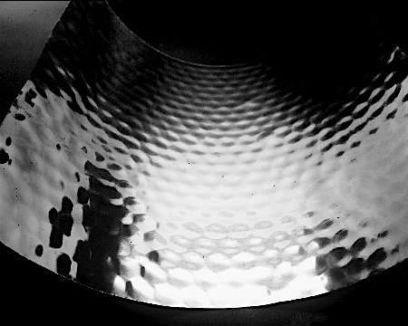 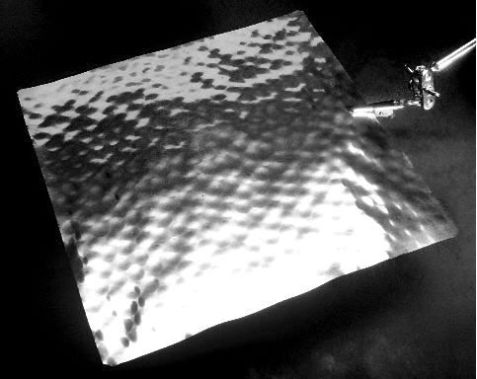 Below: the bistable dome array can hold it's shape while bent along different axes.

Below: the structure is stiff enough to be supported from one location. 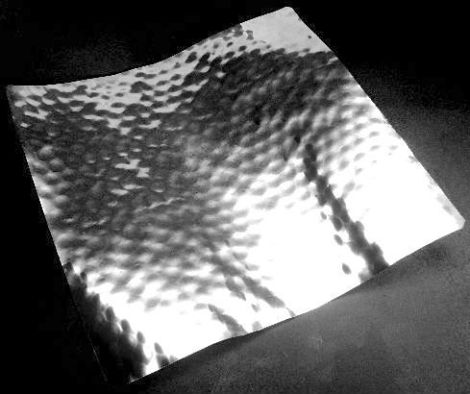 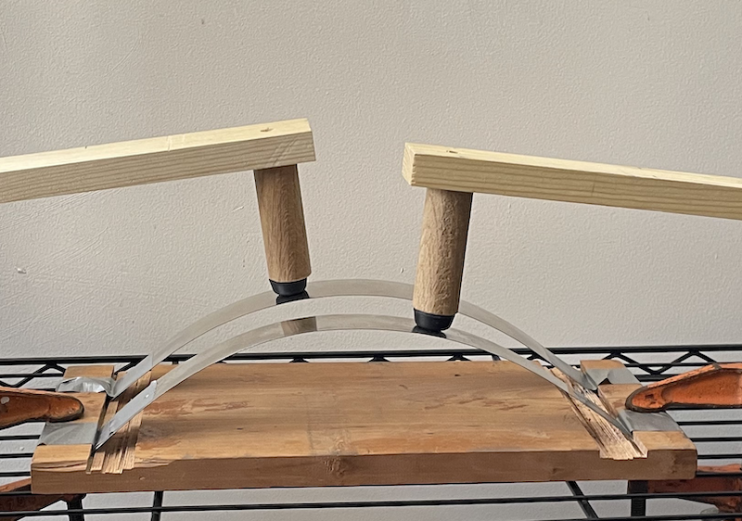 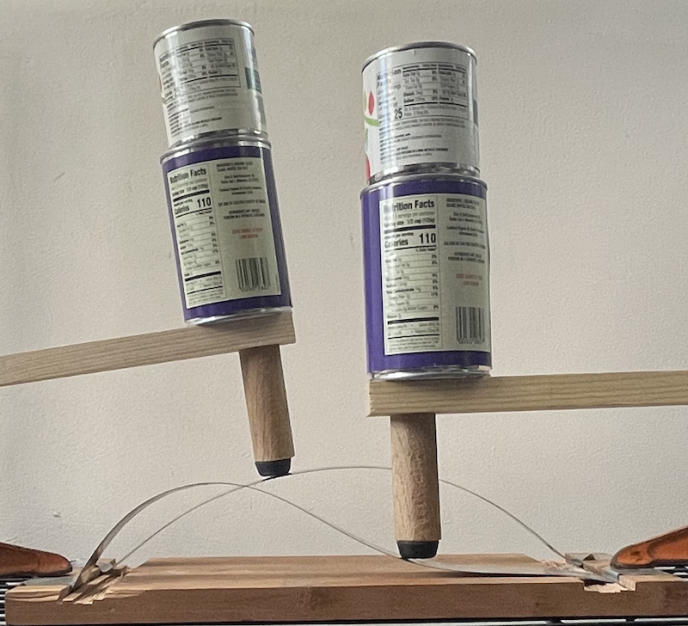 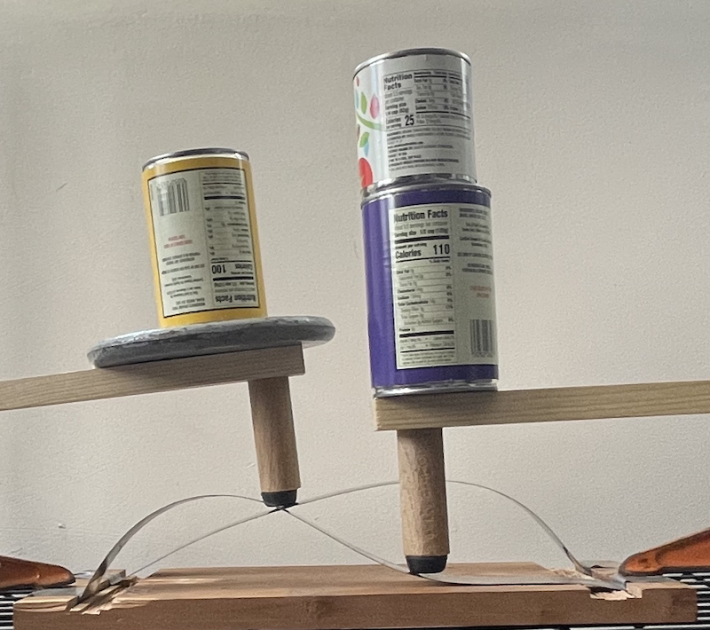 Two identically sized bands of .03" 302 stainless steel (14" x 1.5",  as seen in video), one flat and one with OBDs, are compared for resistance to deformation.

The OBD structure with all domes on one side is approximately double the thickness, in profile, than the flat .03".

The flat piece is collapses gradually and is collapsed by 1.5lb weight. The OBD structure can hold 4x the weight, 6lb, and collapses suddenly with 6.5lb.

Flat band is continuously deformed by added weight and nearly flattened with 1.5lb while OBD row is barely deformed.

Flat stock in front. OBD row is in the back. Ends are stopped in grooves and taped down. Starting curvature is OBD row stable state, all domes on one side.

5lb weight under the 1lb can = 6lbs. The OBD band collapsed suddenly at 6.5 lbs.

Overlapping bistable domes compared with flat for resistance to deformation.